← more from
Rocket Recordings
Get fresh music recommendations delivered to your inbox every Friday. 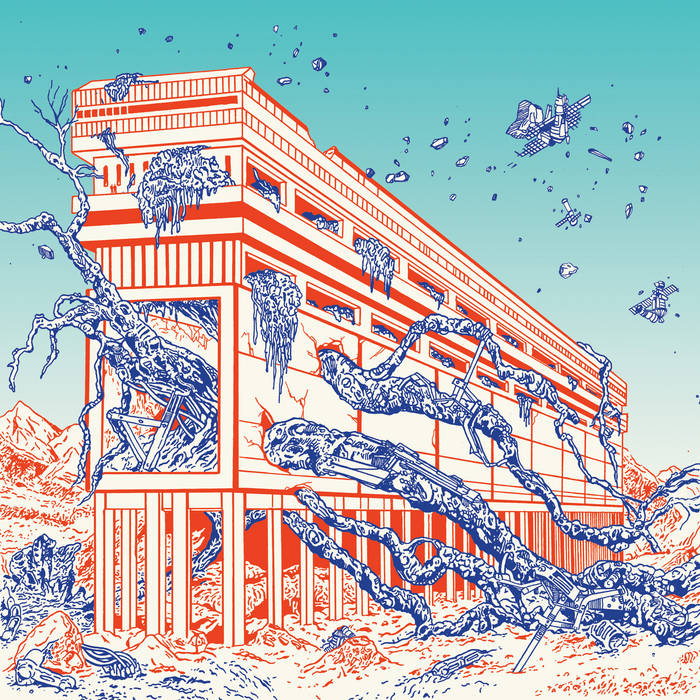 Arriving via a triangulation of Athens, Crete and London, yet existing at a psychic intersection between the ruins of crumbling infrastructure and an intimidating future dystopia Kooba Tercu have seen fit to take arms as only they see fit. ‘Proto Tekno’ is their mission statement writ large - a potent and pulverising collection of incendiary jams fuelled by the modern age yet transcending it with vicious style. Equal parts groove-driven mantra, red blooded freakout and experiment onslaught, this is the sound of a fearless band raging against the dying of the light.

Led by Johnny Tercu, and sharing common members with bands like hypno-rock force Casual Nun and electronic experimental outpost Echo Canyon, this collective joined forces over a ten-day studio session in which a furious bout of creativity and chemistry led to not only their second album ‘Kharrub’ (which emerged as a release split between the London-based Hominid Sounds and the Greek labels Mafia and Body Blows) but this - their third voyage into the unknown via coruscating noise and infectious rhythmic drive, and their most powerful and captivating to date.

Confident that all formulas are fundamentally there to be mercilessly
rearranged, and that a sheer force of will can easily transform the ridiculous into the sublime. ‘Proto Tekno’ seamlessly travels from a fuzz-bass headbanger like the opener ‘Benzoberry’ to the mantric blowout of ‘Qasan’ (assaulting CAN-esque dimensions equal parts caustic and cinematic) and from the sleazy swagger of ‘Cemento Mori’ (redolent of the suave machinations of Girls Against Boys) to the polyrhythmic drive of the ceremonial centrepiece ‘Fair Game’, while maintaining their unique full-throttle intensity and generosity of character. There’s Melvins-style groove to be had on ‘Proto Tekno’ (Kamehameha’) ‘just as much as Beta Band-style songcraft (‘Puppy Pile’) yet these disparate influences coalesce vividly into an invigorating and intimidatingly confident assault on the senses.

The band themselves clarify their standpoint as “creating a vision of short-term future and trying to find humanity’s place in that world. Coming from Greece, all the futuristic elements take another turn as developments in technology and commerce take time to filter through in peripheral countries and are often skewed.”

“There’s a certain interplay between old and new, urban and rural, human civilization and nature, poorly maintained underdevelopment or disruptive technology and surveillance, domination and symbiosis. We’ve been exploring the space between such dipoles and trying to create a sense of optimism and militancy to face this brave new world.”

Inhabiting a modern era in which creating art, as the Fluxus group originally proposed, is more than ever a revolutionary act in itself, ‘Proto Tekno’ stands as much as formidable monument to insurrectionary spirit as it does the furious clanguour of six heads in an overheated rehearsal room. It’s a weapon of psychic defence just as much as a love letter to the three ‘R’s of repetition, repetition and repetition. Yet as the ongoing battle against adversity gathers momentum, one thing is for certain - you’ll want Kooba Tercu on your side.

All songs written and performed by Kooba Tercu

Artwork by Bend Design and Jola818

Johnny Tercu and his crew are back. With members now located in Athens, Crete and London, Kooba Tercu came together to record new material.

The whole world seems to be catching up to the same sense of no future Johnny had, as we collectively jump into the void.... we don't really need to update our bio for our latest release 'Proto Tekno' do we? ... more

Bandcamp Daily  your guide to the world of Bandcamp